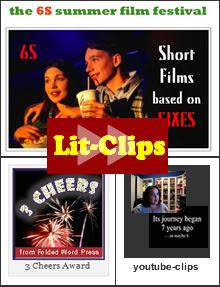 Moving Poems
Moving Poems is an on-going compendium of video poetry from around the web, with a new video every weekday, hosted by Dave Bonta, editor of qarrtsiluni. There is a "Random"-feature in the sidebar - that's how I at first try arrived at "The Art of Drowning" by Billy Collins, which coincidentially connects to the 6S pirate ship video, just like the currently featured "Landlocked" does, too. It's ship video days.

Folded Word 3Cheers
Folded Word has developed a lit clip format called “3Cheers", each Cheer features 3 works from their magazine. An overview of all clips is up here: 3Cheers award. The recent clip is 3Cheers Spring 2010 - literature goes playmobil in this one.

Reviews, Beats, Vimeo Poetry
More lit-clips:
- Referential editor Jessie Carthy reviews books: "4 Book Reviews in Under 7 Minutes!"
- Susan Gibb creates a decade's flash in a poem: "Recycling" (don't get tricked by the title)
- Mel Bosworth goes beat for his new book: "Greasy Beats"
- and there is a huge (and rather miscellangelous) section of "Poem"-clips up in Vimeo: Vimeo Poems / Vimeo Poetry