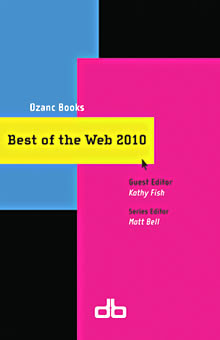 "There’s an astonishing amount of great writing on the web right now. How to even begin choosing the best? For me, I can say that the deciding factor was always the following: Did this writing open my eyes? Will I remember it months from now? Was it beautiful or strange or completely fresh and new? Did this writing unravel me? My own votes were always for those stories, poems and essays that very clearly mattered to the writer." –Kathy Fish, guest editor

Now beginning its third year, with Matt Bell as series editor, and Kathy Fish as guest-editor of the 2010 edition, the mission of the Best of the Web series is to promote and expand the reach and prestige of online literature by offering this annual glimpse into the best writing the internet has to offer.

About Dzanc Books
Dzanc Books was created in 2006 to advance great writing and champion those writers who don't fit neatly into the marketing niches of for-profit presses. As a non-profit, 501(c)3 organization, Dzanc Books not only publishes excellent books of literary fiction, but works in partnership with literary journals to advance their readership at every level. Dzanc is also fully committed to developing educational programs in the schools and has begun organizing many such workshops and Writers In Residency programs. Upcoming from Dzanc are: The Taste of Penny by Jeff Parker and Love Doesn't Work by Henning Koch.