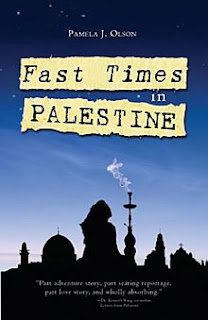 In Fast Times in Palestine, Pamela Olson - a small town girl from eastern Oklahoma who goes on a supposed trip to Europe after finishing a physics degree from Stanford University - chronicles her journey from aimless ex-bartender to Ramallah-based journalist and foreign press coordinator for a Palestinian presidential candidate.

This book, written from inside the Gaza strip and the West Bank, focuses not only on violence, terror, and social and political upheavals but also on the daily rounds of house parties, concerts, barbecues, weddings, jokes, harvests, and romantic drama that happen in between.

The first chapter of the book is online as excerpt: From the Midwest to the Middle East

Pamela Olson grew up in Oklahoma and studied physics and political science at Stanford University, class of 2002. She lived in Ramallah for two years. In January of 2006, she moved to Washington, DC and worked at a Defense Department think tank, but became disillusioned with the prospect of changing Washington from the inside, and in 2007, left DC and wrote Fast Times in Palestine.