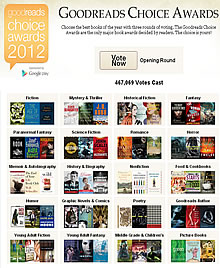 Goodreads is organizing their annual book award again: Readers can pick their favorites in 20 categories, including Fiction, Poetry, Memoir, Nonfiction and Goodreads Authors.


The Awards is now entering the final round:

Background Information on the Award & Some Interesting Comments:
The book nominations are based on Goodread site statistics, and as statistics turned out: "our new crop of nominees boasts a larger percentage of indie authors than ever before."

An additional blog post from Goodreads with some background information and comments, both on the nomination process and last year's awards finalists, and expectations for this year (here's the link to the blog entry: The 2012 Goodreads Choice Awards—Now Open for Voting!")

About the nomination process & the categories
Note on last year's finalists and expectations for this year: