My Mother Was an Upright Piano - Tania Hershman (Tangent) 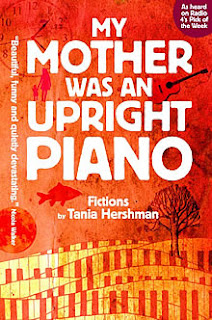 My Mother Was an Upright Piano is Tania Hershman's second collection of short stories, and follows The White Road which was commended by the judges of the 2009 Orange Award for New Writers. It includes 56 short short fictions, some of which were broadcast on BBC Radio 4.

"Tania Hershman writes with such passion and playfulness, the pain and the fear and the hope woven through her stories hits all the harder. The result is beautiful, funny and quietly devastating." - Nicola Walker, actress (Spooks, Inside Men)

For more about the book, visit the book trailer.
There also is a new expat-interview with Tania online at Christopher Allen's I Must Be Off blog: interview link.

Tania Hershman was born in London in 1970, moved to Jerusalem in 1994, and returned to the UK in August 2009. After making a living for 13 years as a science journalist, writing for publications such as Wired and NewScientist, she now focuses on short fiction.