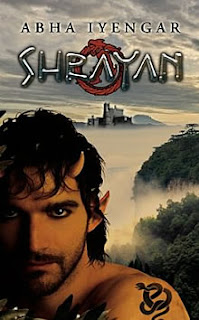 Abha Iyengar's novel Shrayan - an adult fantasy tale - explores an individual’s quest for acceptance in an unfamiliar and unforgiving world: Shrayan emerges from the underground, a fully formed creature, not quite human in appearance. In the dark forest where he finds himself, he is surrounded by snakes. Brought to the city and made to dance as an ajooba, he breaks free and learns dancing and martial arts. He falls in love to discover that beauty has its own price tag. The night he achieves stardom, he leaves his clamouring fans and takes to the streets, hoping to find his lost son.

In his quest for his self, Shrayan discovers aspects of his personality that he did not know existed, and also learns to come to terms with what he is and deal with the challenges that life throws up for him as he knows best. Love is difficult to find and hold, friendship has different meanings, and trying to fit into a world concept is neither possible not required, these are some of the things he learns.

Abha Iyengar is an internationally published freelance writer and poet who lives in New Delhi, India. She is a Kota Press Poetry Anthology contest winner, conducts creative writing and poetry workshops and has written several screenplays. Her poem film “Parwaaz” has won a special jury prize at the film festival at Patras, Greece and has been screened to acclaim at various international film festivals. Abhha blogs at Encounters of an Everyday Kind, where she currently hosts the new edition of the language place blog carnival: "The Other".