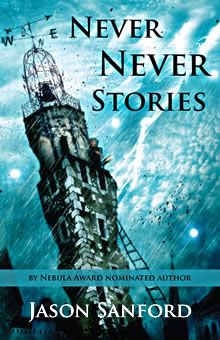 Ranging from science fiction to fantasy, the 10 stories contained in Never Never Stories by Jason Sanford could also be named: "Best Of" - they have won the Interzone Readers’ Poll, been nominated for the BSFA Award, longlisted for the British Fantasy Award, and printed in numerous magazines and book anthologies including Year's Best SF.

The collection also contains an original essay on archeology and fantasy and a cover by award-winning artist Vincent Chong.

There also is an ebook edition of Never Never Stories - it contains all of the content from the print edition along with four additional stories (one of which has never been published) plus a different introduction. One of the storíes is online as excerpt: The Ships Like Clouds.

Jason Sanford's stories have received a number of awards and honors, including being a finalist for the 2009 Nebula Award for Best Novella, winning both the 2008 and 2009 Interzone Readers' Polls, receiving a Minnesota State Arts Board Fellowship, being nominated for the BSFA Award, and being longlisted for the British Fantasy Award. He also co-founded the literary journal storySouth, through which he runs the annual Million Writers Award.

About Spotlight Publishing
Spotlight Publishing is an independent press based in North Carolina, a press that is focused on producing collections of short stories (single-author collections and anthologies), as well as books by established authors that are either out of print with the original publisher, or different from the type of book the author is best known for.