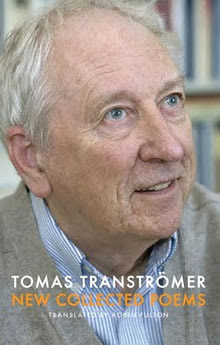 Tomas Tranströmer is Sweden’s most important poet, and was awarded the 2011 Nobel Prize in Literature. The Academy honoured him "because, through his condensed, translucent images, he gives us fresh access to reality". (Nobel Prize page)

Tranströmer's publisher in Britain, Bloodaxe, has a features with notes on a new edition of his work "New Collected Poems", 3 poems in translation with the original included, and a biography online at: Tomas Tranströmer at 80.

New Collected Poems includes all the poems Tranströmer has written during the past forty years, including those from the Bloodaxe Collected Poems of 1987, as well as three later collections, For Living and Dead (1989), The Sad Gondola (1996) and The Great Enigma (2004), and a prose memoir.

For more of Tranströmer's poetry, visit Prelude at Words without Borders, and After a Death + Outskirts at Poetry.org (there's also an essay on his work up at Poetry: Too Much of the Air).

Tomas Tranströmer was born in Stockholm in 1931, graduated as a psychologist in 1956 with additional studies history, religion, and literature, and worked as a psychologist for juvenile offenders for many years. He suffered a stroke in 1990 that left him partially paralyzed and unable to speak; however, he would continue to write and publish poetry though the early 2000s. He is regularly shortlisted for the Nobel Prize, and has received several public recognitions and prizes for his poetry. (wiki-page)

About Bloodaxe
Bloodaxe Books is an independent literary publishing house, founded in Newcastle in 1978 by Neil Astley joined in 1982 by chairman Simon Thirsk. In time, it turned into Britain's premier poetry publisher, with an international reputation for quality in literature and excellence in design.