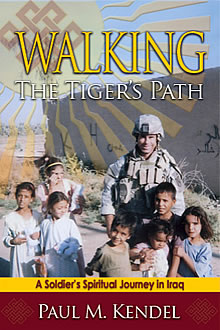 Paul Kendel's book Walking the Tiger's Path - A Soldier’s Spiritual Journey in Iraq addresses the horrors of war from an extraordinary human perspective.

In 2005, Paul Kendel deployed with his National Guard unit out of Georgia to Iraq, hoping to use his knowledge of that land to bridge the gap between American soldiers and Iraqi civilians. However, the realities of war crushed his idealism when his buddies began dying at the hands of the enemy. Eventually, his ongoing concern for the Iraqi people alienated some of his comrades, and he felt the sting of growing conflict within himself.

Turning to the books on Buddhist teachings he had brought with him, he found solace in the written words. On a whim, he emailed Shambhala International and requested assistance. An unexpected response and ongoing support from Buddhist teacher and meditation instructor Margot Neuman helped him to retain a sane and humble humanity in a situation that often plummeted into lethal insanity.

An excerpt of the book is online at Issuu: Walking the Tiger's Path.

Paul M. Kendel’s (SSG Ret.) first experience with the current “War on Terror” began with a deployment to Saudi Arabia with the California National Guard following 9/11. In 2005, the military deployed him to Iraq. Kendel holds an M.A. in both History and Anthropology, and is currently teaching world history and special education in Jacksonville, Florida.