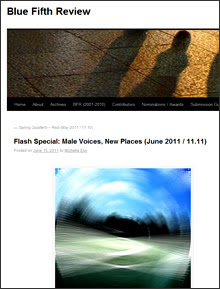 The Blue Five Notebook is the monthly series of poetry, flash, and art from Blue Fifth Review. In each issue, there are five works published. The Notebook series also features special poetry and flash issues and themed quaterlies.

This issue evolved organically as a companion set to the Glass Woman issue. Issue editor Michelle Elvy explains: "I did not set out to create a 'male' issue in the way I set out to devote the March flash issue to the Glass Woman writers. But when I stacked up stories in a row this month, these were the ones on top of my pile, and they all happened to be about place, and they happened to be from male writers. Also, a few of them were new voices to me, and I liked that. When Sam Rasnake (founding editor of Blue Fifth Review) and I discussed the works as a whole, we decided it was a really interesting approach, to create a companion to the Glass Woman Special."

Discource: What Is a Man's Literature?
The issue coincides with a larger literary discussion on gender and writing, sparked by author Naipaul in an interview. In the interview, Naipaul suggested that women writers are 'sentimental' and 'unequal to me', and also claimed that 'I read a piece of writing and within a paragraph or two I know whether it is by a woman or not.' - which lead to various responses, including the Guardian's Naipaul test (with link to the original interviw) and a New Yorker essay that links back to a text from 1998:  The Lingering Scent of a Woman’s Ink.

Almost parallel to Naipaul, Esquire Magazine released a list of "75 Books Every Man Should Read". Which caused a stir as it inlcudes exactly: 1 female author. Like Naipaul, Esquire sparked responses in various magazines and blogs, one of them the new indie forum "LitMag", with Ethel Rohan's forum essay What Is a Man's Literature?

In the comments, Chris Newgent made an interesting point: “Like would people have called it out and praised it and encouraged it for being so balanced if it had been?”

Things we Love to Hate
Seeing it from this angle, the big fuzz about the New Yorker summer story issue comes to mind. The hook back then wasn’t gender, but age: “Summer Fiction: 20 Under 40″. The result was similar: huge media coverage, discussions, an alternative list (by Dzanc), which led to even more discussionss, one of them titled: “The Lists We Love to Hate: First the New Yorker, Now Dzanc?” .

For more on the issue and the discussion + the links, visit the Daily s-Press feature: The New Yorker: Summer Fiction: 20 Under 40

A thing that went unnoticed about the NY list: it was gender-balanced. Back then, the blueprint Ed put a feature together for the blueprintreview blog, which included this line: “The 2010 summer issue caused a stir, and discussions about the validity of such lists, and the methodology – which probably were both expected and intended by the editors.”

The Ed's guess is: same probably goes for the Esquire editors, and for Naipaul. Maybe they even thought of the New Yorker list effect when planning the issue. Still, the discussions coming from them are interesting, and important, and raise the awareness for the issue, and the stir they cause show that they point at unresolved issues -the question remains, though, if this stir-approach isn't adding to gaps and stereotypes.

The indie magazine Luna Park featured a series on "Race, Class, Gender & Sexuality in Indie Publishing" last year. The Ed contributed an article on gender ratios, and the effects on categorization - it also includes a passage on the summer fiction issue:

"Categories influence the viewpoint — I was reminded of this again when The New Yorker launched their fiction issue in June. Instead of just calling it “Summer Reads,” they titled it: “20 under 40.” And that’s exactly what the reviews and discussions then picked up on: instead of focusing on the stories and authors, the focus moved to the age categorization, and the whole topic of “youth” vs” “aging”. What almost went unnoticed was the fact that the issue came in a fine balance of 10 male and 10 female authors, and with more than 30% non-native writers included. That’s another effect of categories: they define the directly accessible statistics."
essay link: Tag Poc 50/50, or: the Complexities and Effects of Categorization


Women + Men
And of course, once you start to gather links, more pop up. here are 3 links on the theme "Women + Men" and the indie lit scene, from the Ed's blog:

1) Women + Men, "White Heterosexual Male" + "I Am Not Sorry to Have a Vagina".
on female / male literary magazines, and also with links to and quotes from Roxane Gay's essay "I am Not Sorry to have a Vagina" in HTML Giant, which again links and quotes to an article in Guernica with this line: "Women make up 80 percent of the fiction reading audience in this country. So why, guest fiction editor Claire Messud asks, are women authors so frequently left off the best-of lists, and left out of prestigious book prizes?"

2) poetry 2000-2009 + number trouble + the internet
with this quote: "----> some number trouble: "as the Guerilla Girls pointed out in the 80's, less than 5 percent of the artists in the Modern Art sections were women but 85 pecent of the nudes were female. Things were different fo us, after all."... which  also connects to another blog post:

3) indie lit scene gender imbalance?
with quotes from a Big Other discussoin hat reflects on the question to which degree the indie lit scene might be male-centric. it was this post that later sparked the Luna Park essay.
Eingestellt von Dorothee um 6/19/2011

Email ThisBlogThis!Share to TwitterShare to FacebookShare to Pinterest
Labels: blueprintreview