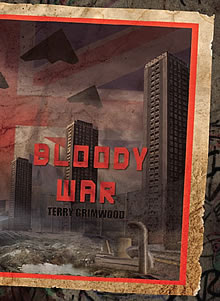 Bloody War. Always on the news, from somewhere around the world. War seems to be something humanity just cannot get out of its system. And yet, for most of us here in the UK, war is little more than a spectacle where we sit comfortably, tut-tutting over horrors taking place in far off and unknown lands, before returning to our grumbles about the spending cuts or immigration or whatever else it is that sets you off. That’s as far as it goes, save maybe for memories and stories of the dark days of WWII. But just suppose that all-out war was to come to Great Britain again? This dark, bloody and very British apocalyptic novel explores just this idea.

Imagine George Orwell’s 1984 updated for 2011, with the focus on family, character and relationships rather than political ideology, and you might have the measure of Bloody War. This book, like our society, is one where politics has become an opaque and distant game, and where most people can see no further than their own living rooms. If we are not careful then the price for such false comfort, Terry Grimwood seems to suggest, may one day be terrible indeed.

Suffolk-born Terry Grimwood started his working life as an electrician and is now a college lecturer. Along the way he has been a quality assurance manager, project manager and technical author. He has written and directed three plays and runs the Exaggerated Press. His novella, The Places Between is available from Pendragon Press and his novel Axe will be published by bad Moon Press in late in 2011.

About Eibonvale Press
Eibonvale Press is a small press run by a writer, artist and reader who loves books. "It's as simple as that. It is not intended to be particularly commercial or make large sums of money for me or anyone concerned (though it would be nice if it did, of course!), but it aims to produce beautiful and lovingly-designed editions of excellent writing in modern horror, magic realism and the surreal."

Email ThisBlogThis!Share to TwitterShare to FacebookShare to Pinterest
Labels: novel