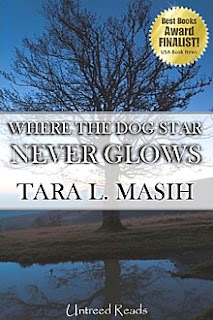 In her debut collection, Tara Masih shows an intimate sense of understanding her characters' innermost feelings, creating a memorable map of diverse characters that span the globe and several eras. Ghosts dance, butterflies swarm, men crystallize, the sun disappears, and water plays a role in both destruction and repair of the soul.

With an unflinching eye, a mythical awareness of the natural world, and poetic, crafted prose, Masih examines the dark recesses of the mind and heart, which often leads to a small or great triumph or illumination that will resonate long after the last page is turned. Publishers Weekly says: “Striking and resonant.”

Update June 2011: Where the Dog Star Never Glows was a finalist in the National Best Book Awards and now is on sale at Amazon as an ebook with Untreed Reads publishing company and a new cover.

Tara L. Masih is a graduate of Emerson College’s Writing and Publishing Program. She has won awards for her fiction and received Pushcart Prize, Best New American Voices, and Best of the Web nominations. She is editor of The Rose Metal Press Field Guide to Writing Flash Fiction (featured earlier at s-Press, here: Field Guide to Writing Flash Fiction).

About Untreed Reads
Untreed Reads is dedicated to bringing the best new fiction and nonfiction ebooks to readers throughout the world. In addition to their publishing, they also run The Untreed Reads Blog on their new e-books.