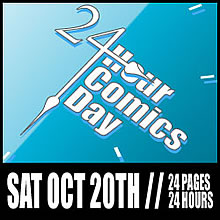 Just a couple of days, then it's NaNoWriMo again - the time of writing a novel in one month. The comic artists already completed their creative marathon: for them, it's creating a full 24-page comic in 24 consecutive hours.

Advice for creative tasks
These might also be good for other creative marathon tasks:
Surviving Twenty-Four Hour Comic Day

The history of the 24-Hour Comic day
The original 24-Hour Comic was created by Scott McCloud, who says: "In 1990, I dared my friend Steve Bissette to draw a complete 24-page comic in a single day. To seal the deal, I agreed to do one too. I did mine, Steve did his, and two decades later, thousands of cartoonists have taken that same challenge."  - More about the day, on the official 24-Hour Comics Day website. 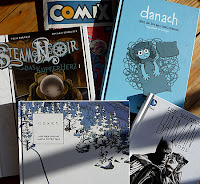 Extended Comic Reading Session
In a coincidence of time, there also was a comic fair happening in Germany exactly at 24 hour comic day, which lead to an extended print comic reading session, with "Noel, or: Charles Dickens goes Batman" + "In Search of Peter Pan" + Comic artists live:
Graphic Novels of the Dickens, Steampunk and Alpine kind (or: what are you reading?)