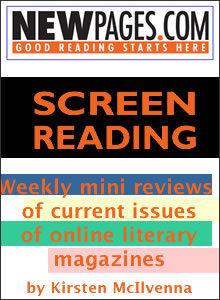 Just the sheer number of online literary publications that launch every month can be overwhelming both for  readers and writers. And in contrast to books, there weren't really many reviews for online magazine yet. That's how the idea of Screen Reading sparked:

"In an effort to 'give more love' to online magazines - which are fabulous but often don’t get as much attention," editor McIlvenna says, "this weekly column will introduce readers to some good writing and places to submit work."

Magazines featured so far include, among others: Memorious, Eclectica Magazine, SmokeLong Quarterly, elimae, Carve Magazine, LITnIMAGE, Cigale Literary, pif Magazine. Each week Kirsten McIlvenna spotlights a new set of online literary magazines, offering a glimpse into some of the best and newest writing on the web.