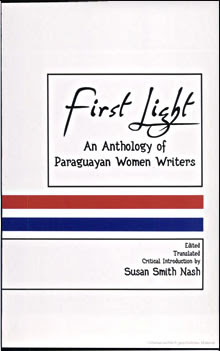 First Light is an anthology that features works by 25 important Paraguayan women writers. Collected, translated and edited by Susan Smith Nash, it ranges from the transformation of Paraguay to virtually a matriarchy after the Triple Alliance and Chaco Wars of the early 1900's killed more than 90% of the male population of the country, to Alfredo Stroessner's 35-year dictatorship and its impact on Paraguayan artists and writers.

From the introduction: "This anthology of Paraguayan women writers is the culmination of more than two years of focused research and investigation into the nature of Paraguayan history, culture, and art, with special emphasis on literature. In the 12 or so visits I have made to Paraguay since November 1996, I have made a point to meet with the women authors (who have become very close friends) to conduct interviews and to participate in as many of the workshops, gatherings, book fairs, readings, and book presentations as possible. My primary objective in preparing this document is to introduce English-speaking audiences to a body of work that is largely unknown, and rarely included in anthologies. Of all the women authors represented in this anthology, it is perhaps Renee Ferrer who most directly addresses the issue of Alfredo Stroessner's 35-year dictatorship and its impact on the psyche and collective consciousness of Paraguayan artists and writers."

The full introduction and selected works by 14 authors are online here: An Anthology of Paraguayan Women Writers, and here's the printed version at Google Books.

About Susan Smith Nash
After receiving her Ph.D. in English from The University of Oklahoma, Susan Smith Nash has spent a great deal of time on educational, economic development, and literary projects in South America and the former Soviet Union, particularly Paraguay, Brazil, Argentina, Azerbaijan, Uzbekistan, Kazakhstan, and Russia. In e-learning since the early 1990s, Nash is involved in e-learning and hybrid learning and training at universities, corporations, and not-for-profits.
Eingestellt von Dorothee um 8/17/2012