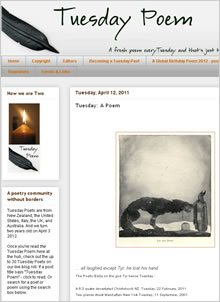 A poetry community without borders: that is Tuesday Poem. The poets involved are from New Zealand, the United States, Italy, the UK, and Australia.

Tuesday Poem is like an Open Mic event in the blogosphere - the poets who participate blog widely but try to post poems on Tuesdays: either own work, or work from others they admire. The poets also take turns to be hub editor.

Today, April 3rd 2012, Tuesday Poem is turning two years old and celebrates the event with a global poem. Twenty-six poets (living in six countries and 12 different cities) will contribute a line each over 14 days to create it.

You can follow the growing poem at "Birthday Poem", which also includes a note from editor Mary McCallum: "Yes, Tuesday Poem is two years old. It began here on April 13 2010 after a casual start with a bunch of poets on my blog O Audacious Book, and has been posting every week since, bar a couple of weeks off over summer. Our Tuesday Poets take turns to be editor, and this involves selecting a poem, getting permission to run it, and writing up a response. It's that personal choice and response which, we believe, makes our posts so interesting and engaging for readers. Each of our poets also posts a Tuesday Poem each week on his or her own blog -- their own poems and poems they admire written by others. Look to the sidebar for those."