The Most Beautiful Thing - Fiona Robyn 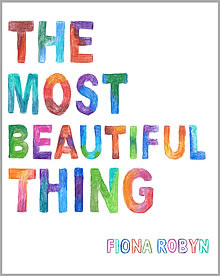 Fiona Robyn's new novel The Most Beautiful Thing tells the story of two summers in Amsterdam. The first: fourteen year old Joe Salt, obsessed with clouds and falcons and perplexed by humans. His aunt Nel, a chaotic artist with two lovers. The second, fifteen years later: a family secret, which makes sense of everything, and pushes Joe to breaking point...

"I was surprised by this wonderful novel. I thought initially it was going to be a 'relationship' book, but as I became more involved with the characters I realised it was a significant contribution to the literature of 'The Outsider'. From the perspective of middle age I can identify with so much experienced by Joe, both as a teenager and a young adult, and am amazed at the perspicacity of Fiona Robyn in capturing it so well." ~ Anthony Foley via Amazon.com

Fiona Robyn is a novelist, psychotherapist and creativity coach. She co-founded Writing Our Way Home with her husband Kaspa and runs mindful writing e-courses and an online writing community. Her previous novels include 'Thaw' and 'The Blue Handbag'. She lives in the skirts of the Malvern hills with Kaspa and her three cats.