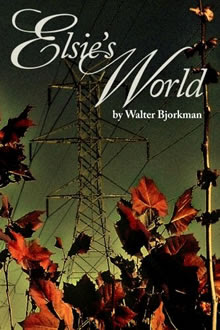 Elsie’s World is a collection of most of the short stories that Walter Bjorkman wrote over a ten month period after returning to the format in 2009. The stories were not written with a collection in mind, that followed after a few of them had been published online and in print. Stop by at Voices for a first story: Sooz & Sid.

"I've never met Walter Bjorkman in person, but I know his characters as well as I know my own. We've collaborated on several projects in recent times, and his inimitable style keeps me playing along. His is an immigrant's tale – a writer who extends from a long line of proud Norwegians and their quirky family history of departures and arrivals, remembering and forgetting. And it is his immigrant heart that makes his stories sound so authentically American, and real." - Michelle Elvy

Walter Bjorkman is a writer, poet and beginning photographer from Brooklyn, NY now residing in Maryland. His poems have appeared in various issues of Poets & Artists (O&S), and stories and poems in issuses of OCHO and MiPoesias magazines.

About GOSS183::CASA MENENDEZ
Established in 1998, GOSS183::CASA MENENDEZ publishes poetry books and the literary journals OCHO, MiPOesias Magazine, and Oranges & Sardines, which also features visual works by contemporary artists. Poems that have first appeared in GOSS183 publications have been included in the anthologies of the Pushcart Prize, Best American Poetry, and others.