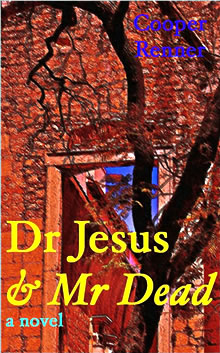 When the Black Death struck Pleasant Wimberley, England, in 1349, it infected every resident. Only two survived, locked in stasis by the plague, unable either to die or to age, doomed by their immortality to be forever on the move. Through the centuries, 30-year-old Richard Dedemon spread suffering and even death as often as he could. But he never suspected that he was not unique, that an extraordinary 12-year-old hounded his steps in secret, diligent to undo the evil his former townsman sowed.
Their journeys intersect, for a final confrontation, in 1980s New Mexico where Dedemon poses as a traveling tent evangelist and faith healer as he plots his greatest devastation: the unleashing of another plague upon the unsuspecting people of the Southwest. Can Jonathan, with six centuries of experience trapped in a 12-year-old's mind, discover his enemy's intentions before it is too late?

An excerpt of the novel is available online: Dr Jesus and Mr Dead - excerpt.

Cooper Renner's fiction has appeared in New York Tyrant, Keyhole, The Anemone Sidecar and other publications. He is translator of Mario Bellatin's Chinese Checkers: Three Fictions (2006) and editor at the online magazine elimae. His poetry collection Mosefolket was published in 2007 under the name Cooper Esteban.