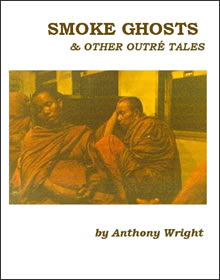 In Smoke Ghosts & Other Outré Tales - a collection of dark but humorous short stories - Anthony Wright weaves his past travels in Australia, South East Asia, Mexico, and Central America to create a lively pattern of outré tales, interlaced with the supernatural, in which the author’s outsider philosophy is central to the thread of existence. A sample story: Banano's Bar

“In an extremely imaginative and well-written collection of vignettes from travels to adventurous non-tourist destinations, Australian Anthony Wright has invoked Burroughs, Bowles, Dostoyevski, Kerouac, and even to some degree Joyce as he searches out the sacred and profane of conemporary society." - Tom Hibbard

Anthony Wright was born in Melbourne, Australia, graduated in film production at the Royal Melbourne Institute of Technology, and was employed in various occupations and traveled through 20 countries before settling in Mexico City in 1993. He lived and worked as a journalist before returning to Melbourne in 2001, where he completed an education diploma at the University of Melbourne and began work as a teacher. He returned to Mexico City in 2008. His fiction, journalism, poetry and photography have been published in Australia, China, England, Mexico and the United States. (Anthony Wright on Facebook)