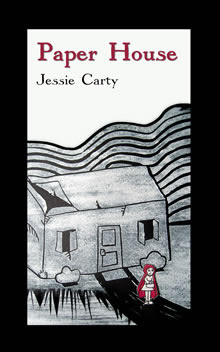 Through the 64 narrative poems in this collection, Jessie Carty illustrates one woman's coming of age in the face of neglect and unmet social expectations. However, these are not poems of woe. Instead, Carty flings open closet doors and jumps in, describing the dark recesses with an innocent acceptance of what is rather than what should be. The births of babies and love. The deaths of elders and allusions. The reconstruction of homes and lives. An unflinching honesty folds them all into "boxes in boxes like Russian dolls," waiting for us to lift the lids.

Jessie Carty's poems and non-fiction have appeared in publications such as The Main Street Rag, Iodine Poetry Journal and The Northville Review. Her first chapbook At the A & P Meridiem was released by Pudding House Publications in 2009. Her print & e-chapbook The Wait of Atom was released by Folded Word Press in 2009.

About Folded Word (+PicFic + unFold + Heron)
Folded Word is an independent press that continually seeks new ways of connecting readers to new literary voices. Though we do sell our books and chapbooks, we offer free poetry and fiction to the public in our Twitter-zines PicFic and unFold, as well as our print broadside, Heron. We also value craftsmanship, both of literary works and the medium in which they are rendered--as demonstrated by our handcrafted Signature Series chapbooks. Folded Word is managed by J.S. Graustein with the support of Rose Auslander, Ben White, and the entire Folded family of contributors.