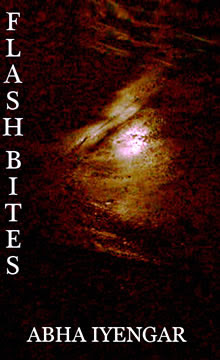 Flash Bites by Abha Iyengar is a collection of flash and micro fiction, telling stories in a few words, letting the reader in into a world and allowing her to fill in the gaps to arrive at her own interpretations. The stories are sometimes down-to-earth and sometimes surreal. They open a different door to let the light in on what may seem to be the mundane and ordinary. They give an insight into what lies beneath the surface of things, people and places.

You can read more about Flash Bites, sample a few excerpts, or buy the e-book online at Smashwords: Flash Bites.

Abha Iyengar is an internationally published writer and poet. Her work has appeared in Bewildering Stories, Dead Drunk Dublin, Danse Macabre, Conversation Poetry Quarterly and others. She is a member of the ‘Riyaz' Writer's Group at The British Council, New Delhi. Her poem film “Parwaaz” has won a special jury prize at the film festival at Patras, Greece and has been screened to acclaim at various international film festivals. She received the Lavanya Sankaran Writing Fellowship for 2009-10. She blogs at Encounters of an Everyday Kind.