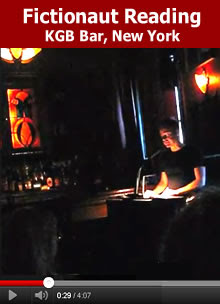 It happend in New York City, in the KGB Bar: an international fictionaut reading with  main headliners Christopher Allen from Germany and Matt Potter from Australia, and an open mike format that let about 15 other writers the chance to dazzle the KGB Bar, including Tania Hershman from the UK.

For all who didn't have the chance to be there, Bill Yarrow filmed the reads and put them online at YouTube: Fictionaut Reading.

But that's only half of the digital fun: there are several travelogues and blog posts that spin from the reading, lead up to it, or link to further reads:

Christopher Allen's blog post: Fond Memories of the KGB: "The KGB Bar is small and dark. In former times, I'm sure this space was a dank, cloudy fishbowl of the smoking intelligentsia..."

Tania Hershman's travelogue: The Languages We Speak and the Languages We Don't: "I have just had quite an amazing month in the USA and am going to attempt to sum it up, as if that was ever possible, or at least sort out some of the thoughts in my head into some coherence! ..."

Robert Vaughan's post with extra-links Hump-a-day late: "The readers were far flung from all over the globe, and the audience was really appreciative..."

Michelle Elvy's reflection (via facebook): "Sitting on a cool winter evening listening to my own story, in another voice, read on a warm summer night in NYC, thanks to Bill Yarrow's video of readings at the recent Fictionaut event in NYC. You can hear Christopher Allen, Tania Hershman, Matt Potter and also Susan Tepper reading my work here at YouTube: Fictionaut Reading. Feeling very happy about this!! Thanks to you all -- and for Bill for editing this all together."

Email ThisBlogThis!Share to TwitterShare to FacebookShare to Pinterest
Labels: about a place, events, short story