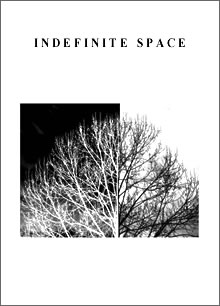 amidst the portraits & trees & word halters--
the poems underwater, the poems in air,
the poems breaking the horizon
// sundials & shadows--
Indefinite Space.

Indefinite Space is edited by Marcia Arrieta. Her first book of poems triskelion, tiger moth, tangram, thyme is available through Otoliths (+ was recently reviewed by Melusine, here). Her chapbook experimental: was published by potes & poets press, and another collection the curve against the linear is part of The Quartet Series— An Uncommon Accord, published by toadlily press. She has a MFA in poetry from Vermont College.

About Indefinite Space
Marcia Arrieta founded Indefinite Space in 1991 after receiving a grant for her work from the Pasadena Arts Council. She has continued to publish the journal independently for 20 years. Indefinite Space has a penchant for the avant-garde, the philosophical, the minimal (but not always), the natural, and the intangible.