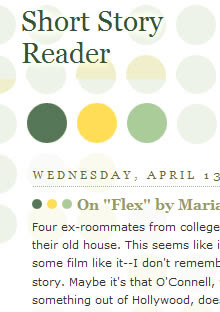 "A blog about good stories on the Web and other reading" - that's The Short Story Reader, which features more than 500 short stories and books so far - all read and reviewed by Jon Morgan Davies.

For reading preferences, stories are tagged by length: 1000+words, 2000+words.., by rating: Four-Star Stories, Five-Star Stories, by magazines, and authors. There also are reviews of nonfiction books and novels included. For all available categories, scroll to the bottom of The Short Story Reader.

Here's what Jon says about his blog:
The blog aims, first, to provide links to and short synopses or reviews of notable stories online and, second, synopses or reviews of books offline.
In essence, what it really is is a personal reading blog. I started it in April 2008. The write-ups on books were something I'd been doing for several years in personal e-mails, but I found I'd lose track of the e-mails and thus lose track of my past reading (this came to full light once when visiting with a friend who seemed to remember more about an Arabic reading list I'd stormed through than I did--and he'd only read my e-mails, not the books).

At the same time, I'd noticed several really good stories online, and I wanted to share those with other people, as well as keep track of them myself so that I could bring them back up at any time. When I first started the blog, I wasn't expecting to find as much quality material online as I have; my views of the online literary scene were largely biased against it based on a much earlier survey (in the late nineties) and on the general lack of cred online publishing has tended to get in the print world. That is, I think, changing and has, in fact, already changed greatly over the past decade. Now, there's so much good stuff online that a blog highlighting some of the best seems to make sense. Of course, these are all my own favorites; awards like the Million Writers Award and books like the Best of the Web anthology try to present a slightly broader view. And there are other people doing blogs similar to what Short Story Reader does.

The selection process
As for how I choose stories to feature on Short Story Reader: I read around various online literary journals, hitting up at least one a day. I have my favorites that I check regularly, others that I check less regularly. And I'm always slowly adding new journals to my reading list, as I find out about them and have time to get to them. The first time I read a journal, I usually try to read a substantial part of one issue, if not the whole thing. Unfortunately, time doesn't allow me to do such surveys for all magazines all the time, so after that, when I return to a magazine, I'm usually picking out the story in the most recent issue that most catches my eye. Of the stories I read, I probably write up about one-fifth of them, any of the ones that stick with me in some way. This isn't a strict science. I'll have weeks where virtually everything I read seems to work for me and will get written up, and other weeks where nothing seems to.

I keep a backlog of stories to feature so that the blog isn't primarily focusing on the most recent work. Partly, what I want to do is reintroduce people to great works in magazine archives, things people have forgotten about or won't know to look for. Hence, by the time a work gets featured, it's often a year or two after its publication.

Recent great stories
I like so much of what Necessary Fiction is publishing these days. I've also enjoyed many of the works at Corium, with Amber Sparks's story "All the Imaginary People Are Better at Life" (link) as well as Tara Laskowski's "Something More Interesting" (link) as highlights of things I've read over the past few months.

About Jon Morgan Davies
As for me, alas, I write too. (Part of me wishes I were just a disinterested fan, as I can say of music, rather than a fellow practitioner, since pure fans seem rare.) When I read so much great material online, it's humbling and helps me understand just why it is so hard to actually get work featured in many of these journals. Reading what's out there also helps me learn sometimes what works and what doesn't. And sometimes, I've seen writers pull off tricks I myself have wanted to pull off for a long while but have never figured out how to do it.
Also interesting to me is seeing how the Web is changing the short story Stories are, by and large, getting shorter. I've had to kind of retool, since my own work has tended to be longer--and was, until a couple of years ago, tending to grow even longer. (Here's my website with links to some of my stories). Even with the shorter stuff I am writing now, the stories are often linked so that they aren't really just short stories (which sometimes makes for them being less successful when the story is pulled out on its own). I guess writing wise, I still am wanting that longer form. That's harder for online reading, though.