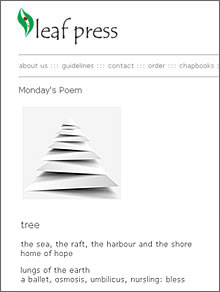 It's composed of lines by 37 poets, here the first 4 lines from 4 contributors:


"the sea, the raft, the harbour and the shore
home of hope
lungs of the earth
a ballet, osmosis, umbilicus, nursling: bless..."

Beneath the poem is a version with poet names included. No one knew what the others wrote, the brief guidelines were: "An entry consists of one line or one couplet. Each line approximately 12 syllables."