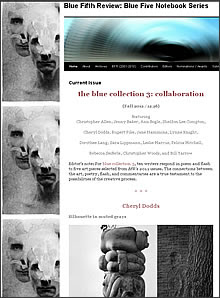 For the Blue Fifth Review's "blue collection 3: collaboration", ten writers respond in poem and flash to five art pieces selected from Blue Fifth Reviews’s 2011 issues. The connections between the art, poetry, flash, and commentaries are a true testament to the possibilities of the creative process.

About Blue Fifth Review
The name of this online journal, Blue Fifth Review, has its origins in jazz: the mysterious third blue note, the blue fifth. Sam Rasnake began Blue Fifth Review in the winter of 2001, and from then until 2010 BFR appeared twice yearly in journal format, adding a themed supplement issue every other year. A quarterly Broadside series was added in 2006. In 2011, Michelle Elvy joined as an editor and BFR moved its online site to WordPress, launching the Blue Five Notebook Series. The format and number of issues broadened to include flash, while limiting the selections to five written works and a single piece of art per issue.