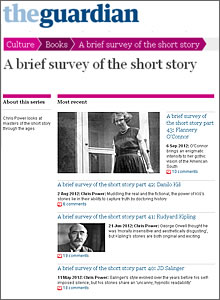 In a literary series that started in 2007, Chris Power portrays authors of short stories, and the development of the short story as format over time.

In his own words, the portrays form "... a regular series of blogs that propose to offer a (very) partial survey of the short story, each post dealing with a single author who did or is doing something special with the form. In the interests of full disclosure I should point out that when I say "partial" I mean both "incomplete" and "biased", and I hope I'll get to hear dissenting opinions from you folks."

The series starts with Anton Chekhov, whose "subtle portrayals of complex, morally ambiguous characters set an example writers are following to this day" and with H.P.Lovecraft, "a master of fantastic horror tales, but the hate which drove his work was all too real."

Most recent features include Flannery O'Connor ("who brings an enigmatic intensity to her gothic vision of the American South" and Yugoslavian author Danilo Kiš ("Muddling the real and the fictional, the power of Kiš's stories lie in their ability to capture truth by doctoring history").

A series overview is online here: A brief survey of the short story.
So far 43 featuers are online.