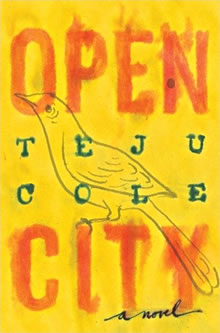 Published by Random House and reviewed in the New Yorker, this novel technically doesn't exactly belong into this blog on indie books and online literary magazines. Yet if you visit the Links section of the author's page, you arrive at a very indie note in section 4. Right between links to the African Cities Reader and Vanity Fair  Teju Cole states: "I’m a frequent contributor to the excellent online journal Qarrtsiluni."

Small open world, it is. This cross connection also reflects in 2 recent reviews from fellow bloggers Jean Morris and Parmanu, who both are contributors to qarrtsiluni - and to BluePrintReview.

"It’s not a total surprise to see a friend first encountered through the different blogs he’s kept now find considerable success with his first novel. Not a surprise, but a new and engaging experience," notes Jean Morris in her blog post "Open City opens here". And if you follow the contributor link above, you arrive at the visualization of this cross connection: Ekphrasis 1: Jean + Teju Cole.

The second blog post, by Parmanu, is actually a letter to Teju Cole with a reflection on reviews in general, and also on the difference the earlier connection makes: "Looking at these reviews I sometimes wonder how I would have responded if I had known nothing about the author. Would it have been a different book for me?" - The Review Cycle

About Teju Cole
Teju Cole was born to Nigerian parents and grew up in Lagos. His mother taught French. My father was a business executive who exported chocolate. At fifteen he published cartoons regularly in Prime People, Nigeria’s version of Vanity Fair. Two years later he moved to the United States. Since then, he spent most of his time studying art history, except for an unhappy year in medical school. He currently lives in Brooklyn.