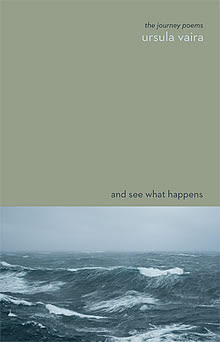 In her first book of poetry And See What Happens - The Journey Poems, Ursula Vaira captures the rugged and challenging beauty of the West Coast landscape and writes the poetry of 3 transformative journeys in British Columbia's wilderness.

The first, told through a set of linked poems, describe her thirty-day, thousand-mile paddle from Hazelton to Victoria. As a Caucasian civilian, the only woman in the canoe, Vaira bears witness.

"A heck of a wind/ bounces me into the mountains... " - So begins the second poem, the story of a woman's stay in an isolated hunter's cabin in the northern Rockies. The third and final journey in Vaira's new collection is a poem of place, of landscape and of westcoast imagery from a twenty-two-day kayaking journey that rounded Cape Scott and Cape Cook on Vancouver Island.

"These poems are talismans of grace, beauty and healing." - Lorna Crozier

Ursula Vaira grew up in northern BC and taught school in the Arctic and on the northwest coast. Her poems have been published in literary journals and in anthologies. Ursula worked at Oolichan Books for ten years then founded her own publishing house, Leaf Press, in 2001.

About Caitlin Press
Caitlin Press publishes culturally significant books, including fiction, non-fiction (both historical and creative), and poetry. It was established in 1977 by Carolyn Zonailo as a feminist literary press. In the 1980s, Caitlin Press moved from Gabriola Island to Vancouver and expanded its mandate to that of a BC literary press.