"Be There Now" - a collection of true travel stories 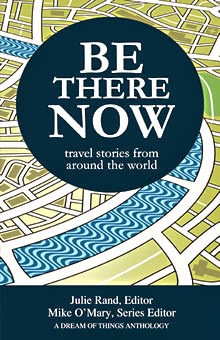 "Be There Now" is a collection of true travel stories featuring twenty-two contributors who share adventures and escapades from around the world.

The stories include the tale of an amateurish kidnapping in Nicaragua that could have been told by Woody Allen, and a David Sedaris-esque tale of two ships passing in a Paris art supply store. Existential stories from a man lost on the flooded Amazon River at night, and from a woman who encounters a grizzly–in the same area where her father and stepmother were killed by a bear.

Insightful stories about a woman’s spiritual journey in Peru (complete with hallucinogens!), and about a female journalist’s friendship with an Iraqi translator in Syria. And stories about endangered species in exotic locales, including helping a sea turtle lay its eggs on a Costa Rican beach, and taking a blind man to visit the mountain gorillas in Rwanda.

The book is available as paperback ($12) or as e-book for very travel-friendly 99 cents (link).  It's published by the indie book publisher "Dream of Things", you can find more about the book on their website: "Be There Now".

Stories, places and authors include: