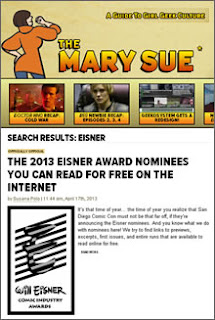 The Eisner Awards are prizes given for creative achievement in American comic books, sometimes referred to as the Comics Industry's equivalent of the Oscar Awards. The nominations in each category are generated by a five-member panel and have now been announced. They ate voted on by comic-book professionals, and presented at the annual Comic-Con International convention held in San Diego, California, in July.

"And you know what we do with nominees here!" says the geek web magazine The Mary Sue: "We try to find links to previews, excerpts, first issues, and entire runs that are available to read online for free."

Check out their page for the full list of nominees and links: The 2013 Eisner Award Nominees You Can Read For Free On The Internet

Nominees Range:
Interesting to see that the nomination inlcudes famous names and publishers, but also self-published works, and webcomics and comic-related online magazines. Below the links to the works that can be accessed online completely or as excerpt:

Direct links to the nomintated webcomics


About The Mary Sue
The Mary Sue hopes to be a place for two things: highlighting women in the geek world, and providing a prominent place for the voices of geek women. Because all we really want is to just be able to geek out with all geeks, of any gender, without feeling like our femininity is front and center for scrutinization. To not feel like we have to work harder than guys to prove that we’re genuinely into geek culture. We want simple things, like to be able to visit a comic book store without feeling out of place. To be able to buy a video game without getting the sense that the cashier thinks we’re buying it for someone else.
Eingestellt von Dorothee um 4/20/2013