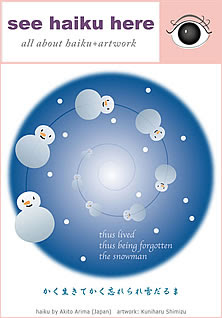 The blog itself is home to more than 700 haiga. The first snowman of the series appeared on December 19, with an introduction to the theme, and an invitation to send snowman haiku: "The snowman is something of a special treat for me in the winter time ever since my child days. Here where I live, it does not snow much though the temperature goes down quite low. The snow falls occasionally but not enough to make a good clean snowman. Last year was different, we had days with heavy snow. Kids and adults (me included) were out in the field, eagerly making snowmen. We were all happy to have great winter friends, the snowmen. I will be posting snowman haiga for a while. I am looking for good snowman haiku. Anybody?" (Snowman haiku 1)

Since then, several Snowman haiku went online already. The image to the left is from Snowman haiku 7. There also is a haiku from BluePrintReview contributor Stella Pierides included, which is how I learned about the blog: Snowman haiku 5.

Note: Kuniharu Shimizu is currently looking for new snowman haiku to continue the series: "This is the last haiga of the snowman series. Yet, it is still in the middle of winter. If anyone come up with good snowman haiku during this season, please share it with me." (link )

For another selection of haiku with a winter mood (from winter nights to stillness to christmas trees), try this link from the archive: see haiku here - December 2010.

Kuniharu Shimizu
see haiku here is the blog of haiga (haiku+artwork) artist Kuniharu Shimizu: a priest of Tenrikyo, the advisor of World Haiku Association, and the judge of WHA Haiga Contest. Kuniharu Shimizu lives in Tenri, Japan, near a city called Nara.